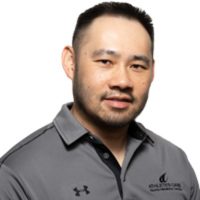 Dr. John Ho completed his Fellowship in Sport Medicine at McMaster University in Hamilton in 2003 where he was a team physician with the McMaster Varsity Athletic Program including sports such as Rugby and Wrestling. He was also involved with the medical team of the CFL Hamilton Tiger Cats and the National Lacrosse League's Toronto Rock during his time in Hamilton. Dr. Ho holds the Canadian Academy of Sport Medicine Diploma in Sport Medicine and is board certified by the Canadian College of Family Physicians. He completed his Family Medicine residency at McMaster University and is a medical school graduate of the University of Western Ontario. He maintains an academic interest by being involved with teaching Sport Medicine to resident physicians from the University of Toronto Department of Family and Community Medicine. Dr. Ho has extensive experience with varsity and elite athletes. He is currently on the medical staff for York University's Varsity Sports Injuries Clinic. He is also the Head Team Physician for Rugby Ontario and a team physician for Rugby Canada. He was a Co-Head Team Physician for the MLL Toronto Nationals lacrosse team and the OHL St. Michael's Majors hockey team. He has travelled internationally with several Canadian sports teams to cover events such as the U20 World Rugby Championships and the World Snowboard Cup Finals. Dr. Ho has also covered several high level sporting events including the Toronto Waterfront Marathon, World Lacrosse Championships, World Road Cycling Championships, the World Water Polo Championships and four Canada Games. This past summer, he travelled with the National Rugby Team to cover the Churchill Cup in England and with Team Canada for the World University Games in Shenzhen, China.