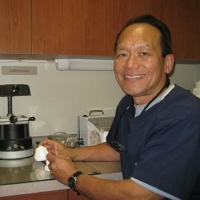 Dr. Kimura received his Doctor of Dental Medicine degree from the University of Medicine and Dentistry of New Jersey in 1986, graduating in the top twenty of his class. He has received numerous class awards in prosthodontics and operative dentistry. Following graduation, he passed the North East Regional Boards, for accreditation in New York, New Jersey, and several other affiliated states. Dr. Kimura is licensed by the Dental Board of California, a member of the American Dental Association, American Academy of Cosmetic Dentistry, California Dental Association, and West Los Angeles Dental Society. Dr. Kimura is also a member of the Westside Study Club to discuss, evaluate, and focus on the latest dental technology and current topics, meeting once a month with about thirty other dentists. The Westside Study Club is directed by Peter K. Moy, DMD, Chairman of Implant Dentistry at UCLA. Dr. Kimura has taken many hours of continuing dentistry at USC, UCLA, and Rancho Los Amigos Medical Center. Dr. Kimura is endorsed by 1-800 Dentist, as a Gold Member of excellent standing since 1990, with actual patient testimonials: (click below) www.1800dentist.com/dentists/Los-Angeles-dentist-in-90049-oID1098.aspx Our patients have also posted their actual testimonials on Yelp: (click below) http://www.yelp.com/biz/robert-kimura-dmd-brentwood Dr. Kimura is a native Angelino, from the Crenshaw Baldwin Hills area. He was inspired to become a dentist at the age of thirteen, by Dr. Clifton Dummet, a dentist that lived down the street in his neighborhood, whom he met as a newspaper boy for the Herald Examiner. After graduating from Dorsey High, he received his BS in Microbiology from Cal State University of Los Angeles. He was later accepted into the Charles R. Drew School of Medicine and Biological Sciences, and earned his California licensure as a Medical Laboratory Technologist. He was later employed by the County of Los Angeles, as a Blood Bank Technologist, at the newly opened Martin Luther King Jr. Medical Center in 1979. He ultimately decided to pursue his lifelong dream of becoming a dentist. Dr. Kimura currently resides in Westchester with his lovely wife Soraya, and twins Ryan and Brianna. He enjoys keeping active with their youth activites of little league and basketball, and enjoys golf, fishing, camping, going to the beach, cooking, and bike riding.