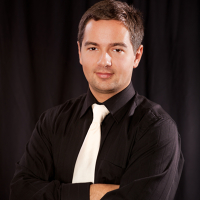 Denturist, Serghei Ischenco, was born and raised in Eastern Europe. His grandparents were doctors and constantly urged him to become a doctor as well, but having great manual dexterity skills he wanted to do something with his hands.  After three years spent in Technical University studying Information Technology and Automatic Systems, Serghei realized that the IT profession would not make him happy in life. Only after coming to Canada in 2005 did he find what his true vocation was — to be a denturist! He graduated from George Brown College, Toronto, in 2009, with Honours and became a licensed Denturist in 2010 starting work in Toronto. In 2011, he opened his practice in Port Hope. Serghei Ischenco is an active member of The Denturist Association of Ontario, The Denturist Association of Canada and the Nobel Biocare Implant Study Club. He specializes in precision and implant supported/retained dentures as well as the “All-on-4” system, also known as “Teeth-in-a-Day”. "I believe that the key to a successful outcome is a thorough knowledge of the subject, mixed with proper treatment planning and an individual approach to every patient because each case is unique and special.” – Serghei Ischenco

Where is Serghei Ischenco's office located?

Serghei Ischenco's office is in Peterborough, ON.

What services does Serghei Ischenco offer?