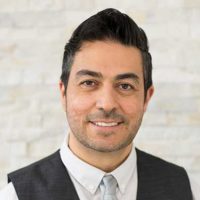 Professional and Educational Background Dr. Marwan Hameed is a practicing dentist in Brandon Smiles Dentistry, Manitoba. He attended the Dental School in Iraq, where he graduated in 1999. After practicing dentistry for several years in the Middle East, he relocated to Canada where he enrolled in an extensive dental program. Distinctions and Awards Before being considered eligible to study in Canada, Dr. Hameed had to sit for a pre-entry exam. He defied the odds by scoring an outstanding 94 points, and out of 572 applicants, he emerged as the second best candidate. This guaranteed him a place at the University of British Columbia's Dental School. He then studied at the University for two years, before obtaining his Canadian dental board license.