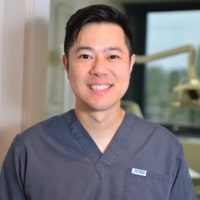 Dr. Christopher Low calls Kitsilano his home, having moved to the area with his wife and family a few years ago. He was born and raised in Victoria, British Columbia, and after high school, he studied Biology at the University of Victoria where he earned a Bachelor of Science in 2003. Following undergraduate studies, Christopher’s interest in the biological sciences led him initially to pursue a career in academia, where he began working at the BC Cancer Research Centre studying prostate cancer. His time in research yielded many enjoyable years of study and the completion of a Master’s degree in Oncology from the University of British Columbia (UBC) in 2010. Later, finding a greater interest in clinical work, he continued his studies and obtained his Doctorate of Dental Medicine from UBC in 2014. He followed this with a year in general practice residency at Montefiore Medical Centre in the Bronx, New York. There he gained considerable experience in all aspects of general dentistry, including treating patients in an emergency setting. Outside of the dental office, Christopher can likely be found on our local mountains, either mountain biking or snowboarding, or in the city, chasing after his energetic 5-year-old son, Theo and newborn daughter, Georgia.