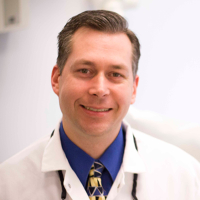 Dr. Daniel Bunn, a native of Las Vegas, is happy to return to his home after serving as a dentist in the United States Navy. He is a graduate of Western High School and received his B.S. in Zoology from Brigham Young University in Provo, Utah. He received his doctoral degree from Case Western Reserve University in Cleveland, Ohio graduating with the Operative Dental Award. He holds a current dental license in the state of Nevada. Immediately after graduation he completed an Advanced Education in General Dentistry residency, receiving special privileges with the oral surgery and periodontal departments. During his service in the Navy he served with the U.S.S. Kitty Hawk’s Air Wing at Naval Air Station Atsugi, Japan. He also served with the marines at Marine Corps Recruit Depot, San Diego, California. During his service he received two Navy/ Marine Corps Achievement Medals, a National Defense Service Medal, a Global War on Terror Service Medal, and a Navy/Marine Corps Overseas Service Ribbon. During his middle school and high school years he served in the Las Vegas community as a Boy Scout achieving the rank of Eagle. He is currently serving as a scout committee member for Troop 223. Dr. Bunn also served a two year mission for his church in Sendai, Japan where he learned his second language Japanese. Dr. Bunn enjoys spending time with his beautiful wife and family, enjoys water sports and playing basketball. Dr. Bunn is happy to be serving in his community again at his new practice Peak Dental.

I take time to listen and answer your questions.

What are you proud of in your practice?

My staff strives to help our patients feel comfortable with the treatment they receive.

Which cases do you enjoy treating? Why?

I enjoy helping my patients understand the benefits of a healthy mouth and how it will positively affect the whole body.

Where is Daniel Bunn's office located?

What services does Daniel Bunn offer?