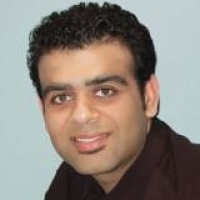 Dr. Neeraj Pershad graduated from Lester B. Pearson Collegiate Institute in Scarborough as the Valedictorian in 1995. In addition, he was awarded the Governors General Bronze Medal for graduating with the highest academic average. After high school, Dr. Pershad attended the University of Toronto where he was named to the Dean’s list and the recipient if the V.W. Bladen Award. He then attended the Faculty of Dentistry at the University of Toronto, where he graduated with honors in 2001. Dr. Pershad received the Dr. J.G. Bourassa Cup for being the most outstanding student in his class, and the Eaton Award of Excellence for graduating as the most outstanding dental student in Canada. In addition, he received the Canadian Dental Association President’s Award (for scholarship, leadership, character and humanity), the Ontario Dental Association Proficiency Award (for academic and clinical excellence), the American Association of Oral and Maxillofacial Surgeons Dental Implant Student Award, American Academy of Dental Practice Administration Award, the Gordon Cressy Student Leadership award, the Faculty of Dentistry Alumni Association Award of Distinction, the Dr. John A. Sherman Memorial award (for being the most outstanding student in third-year dentistry), the International College of Dentists Scholarship (for academic proficiency, leadership, character and extra-curricular activities), the Dr. Howard Rocket Scholarship in preventive dentistry, the S.G. Bridgman Prize (for the most outstanding dental student in second year), and the Isaak Orfanidis Achievement Award (for the most outstanding student in first-year dentistry). Dr. Pershad then moved the United Sates where he completed a one-year hospital-based general practice residency at the State University of New York in Syracuse. After completing his hospital training, he moved to Winnipeg to specialize in Orthodontics. At the University of Manitoba, Dr. Pershad obtained his Masters degree and a diploma in Orthodontics. He is currently involved with research and teaching at the Faculty of Dentistry at the University of Toronto. Dr. Pershad has successfully completed the American Dental Association National Boards Part I and Part II, the National Dental Examining Board of Canada, and the Royal College of Dentists of Canada exams. He is currently licensed as an Orthodontist with the Royal College of Dental Surgeons.

Where is Neeraj Pershad's office located?

Neeraj Pershad's office is in St Catharines, ON.

What services does Neeraj Pershad offer?